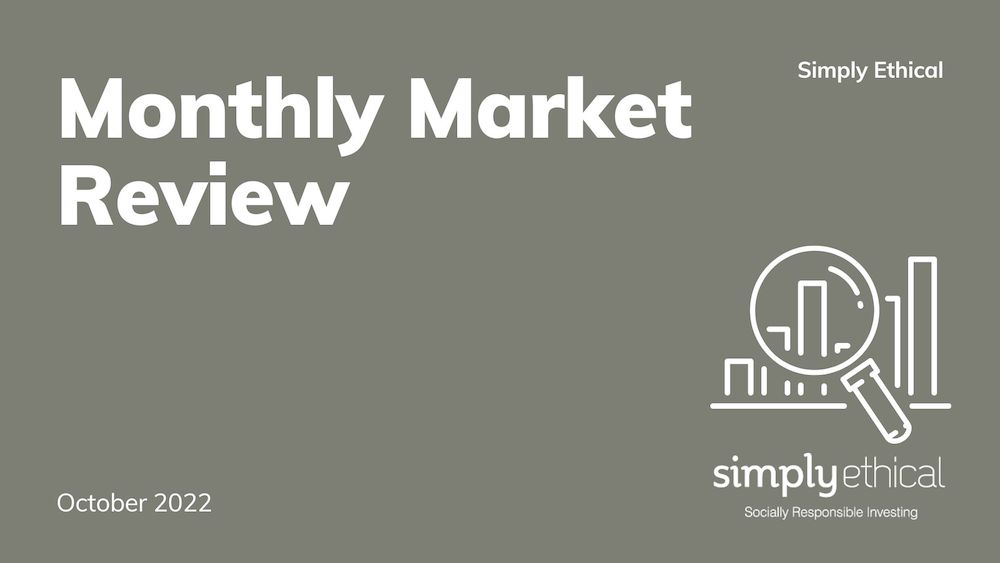 Rishi Sunak became prime minister of the UK on 25th October after meeting with King Charles III at Buckingham Palace. October has been a challenging month for UK politics, as the previous PM Liz Truss had to backtrack on key tax measures announced by then Chancellor Kwasi Kwarteng in mini-budget delivered on 23rd September. Truss fired Kwasi Kwarteng as chancellor, prior to her departure. Meanwhile, China’s President Xi Jinping secured a historic third term as the Communist Party’s leader.

Global equity markets recovered slightly during October after a negative performance in September. Equity markets still remain in negative territory on a yearly basis as monetary policy tightening continues. Federal Reserve and Bank of England both raised the interest rates by 75bps during its November 2022 meeting.

• The annual inflation rate in the UK rose to 10.1% in September of 2022 from 9.9% in August, returning to the 40-year high hit in July. The annual core rate, which excludes energy, food, alcohol, and tobacco, rose to a record-high of 6.5%. On a monthly basis, consumer prices rose by 0.5% in September, unchanged from the previous month.

• Retail sales in the UK dropped 1.4% month-over-month in September of 2022, following a revised 1.7% decline in August. Year-on-year, retail sales dropped 6.9%. Compared with the pre-coronavirus level in February 2020, total retail sales were 1.3% lower.

• The British economy contracted by 0.3% month-over-month in August of 2022, following a downwardly revised 0.1% rise in July.

• Annual inflation rate in the Euro Area continued to break record high levels and jumped to 10.7% in October of 2022 from 9.9% in September.

• Germany’s economy grew by 0.3% on quarter in the three months to September 2022, following a 0.1% expansion in the previous period. On a yearly basis, German GDP advanced by 1.2% in the third quarter.

• The Chinese economy advanced 3.9% year-on-year in Q3 of 2022, exceeding market consensus of 3.4% and picking up from a 0.4% growth in Q2, boosted by various measures to revive economic activity. For the first nine months of the year, China’s GDP grew by 3%.

• Russian president Putin announces Russian annexation of four Ukrainian r• The Bank of Canada raised the target for its overnight rate by 50bps to 3.75% in its October 2022 meeting. This marks the sixth consecutive rate hike, pushing borrowing costs to their highest since 2008.

Data Performance Data as at 31 October 2022. Past performance is not a reliable indicator of current or future returns. This overview contains general information only and does not consider individual objectives, taxation position or financial needs. Nor does this constitute a recommendation of the suitability of any investment strategy for a particular investor. It is not an offer to buy or sell or a solicitation of an offer to buy or sell any security or instrument or to participate in any trading strategy to any person in any jurisdiction in which such an offer or solicitation is not authorised or to any person to whom it would be unlawful to market such an offer or solicitation.