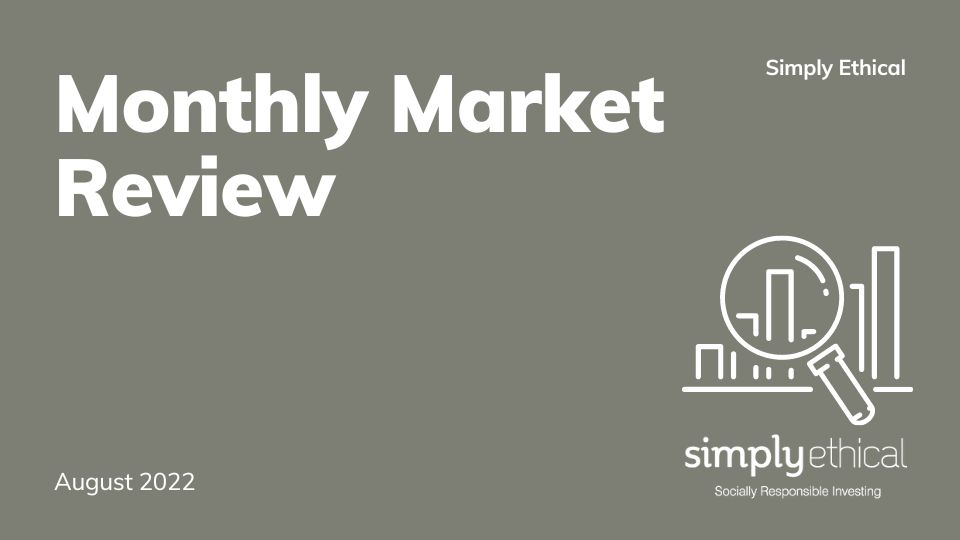 The global financial markets have been very volatile during the month of August as Central banks in the developed economies raise interest rates to tackle inflation, which is at its highest levels since last four decades in the US, UK, and other developed economies. In the US, inflation is hovering between 8%-9%, whilst in the UK it has crossed 10%. The adverse impact on global supply chain due to Covid-19 pandemic; the significant increase in oil, gas, and commodity prices mainly due to Russia-Ukraine conflict; ease in monetary and fiscal policy particularly in recent years have all contributed towards higher inflation than normally experienced by the developed economies.

The US Fed and other central banks have taken a hawkish approach in raising interest rates to reduce inflation. The current US key policy rates are in the range of 2.25% to 2.5% after the 75bp increase in July. A similar increase is expected in the upcoming September meeting. Fed chair Powell in a recent speech at the Jackson Hole said that there will be ‘No pivot’ until the inflation is in control. The Bank of England increased interest rates by 50bp to 1.75% in its August 3 meeting. As expected, rising interest rates and ongoing Russia-Ukraine conflict has kept the markets volatile and in downwards trajectory. All stock indices were in the negative territory during the month and on a yearly basis as heightened economic and political uncertainty continues to impact investors’ sentiment. As expected, government bond yields show an increasing trend following rate rises. Gold is behaving unnaturally as it is generally considered an inflation hedge and a safe-haven in stress times, whilst Oil and Gas remained the best performing assets over the month and on a yearly basis.

• The Bank of England raised its main rate by 50bps to 1.75% during its August 2022 meeting, the sixth consecutive rate hike, and pushing borrowing costs to the highest level since 2009. It is the biggest rate increase since 1995. According to new Bank of England projections, CPI inflation is expected to rise to 13.3% in October, and to remain at high levels throughout much of 2023, before falling to the 2% target two years ahead.

• Energy bills for households are set to increase further as surging wholesale prices drove UK energy regulator Ofgem to raise the cap for electricity and gas bills to £3,549 per year starting in October, an 80% increase to current levels and nearly thrice the amount of last year’s cap.

• The Halifax house price index in the UK rose 11.5% year-on-year in August of 2022, the lowest level in three months. Compared to the previous month, house prices climbed 0.4%, bringing the average price to £293,260, up £39 from the previous month. “While house prices have so far proved to be resilient in the face of growing economic uncertainty, industry surveys point towards cooling expectations across the majority of UK regions, as buyer demand eases, and other forward-looking indicators also imply a likely slowdown in market activity. Firstly, there is a considerable hit to people’s incomes from the cost-of-living squeeze. The 80% rise in the energy price cap for October will put more pressure on household finances, as will the further increases expected for January and April” Russell Galley, Managing Director, Halifax, said.

• According to US Bureau of Economic Analysis, the GDP in the US expanded 1.7% in the second quarter of 2022 over the same quarter of the previous year.

• The Euro Area economy expanded 0.8% on quarter in the second quarter of 2022, higher than a 0.6% rise in the second estimate, and the strongest growth rate in three quarters. Household spending was the main driver of the expansion as covid restrictions eased and southern countries in particular gained from summer tourism season.

• The People’s Bank of China lowered its key loan prime rates (LPR) in August, the second reduction this year, as the board stepped up efforts to revive borrowing demand amid repeated covid-19 outbreaks and lingering property downturn. The one-year LPR, which is used for corporate and household loans was cut by 5 bps to a record low of 3.65%, while the 5-year LPR, which influences the pricing of home mortgages, was reduced for the second time this year by 15 bps to 4.30%.

• Core consumer prices in China increased 0.80 percent in July of 2022 over the same month in the previous year.

• The Chinese economy advanced 0.4% yoy in Q2 of 2022 and slowing sharply from a 4.8% growth in Q1. The latest figure was the softest pace of expansion since a contraction in Q1 2020, when the initial coronavirus outbreak emerged in Wuhan.

• The annual inflation rate in Japan rose to 2.6% in July 2022 from 2.4% in June. This was the 11th straight month of increase in consumer prices and the fastest pace since April 2014, amid surging fuel and food cost following Russia’s invasion of Ukraine as well as a sharply weakening yen.

• WHO warns of significant health risks as Pakistan experiences floods in large parts of the country. Over the course of coming months, its economy is expected to deteriorate as the country deals with challenging situation.

Data as at 31 August 2022. Past performance is not a reliable indicator of current or future returns. This overview contains general information only and does not consider individual objectives, taxation position or financial needs. Nor does this constitute a recommendation of the suitability of any investment strategy for a particular investor. It is not an offer to buy or sell or a solicitation of an offer to buy or sell any security or instrument or to participate in any trading strategy to any person in any jurisdiction in which such an offer or solicitation is not authorised or to any person to whom it would be unlawful to market such an offer or solicitation.